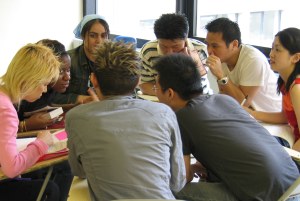 This past week, I have started preparing for a new school year and reflecting on some of the classroom structures I want to refine. While I’ve studied complex instruction during my M.Ed, I am still very new to implementing it in the classroom so I thought I would throw out some ideas here about group work structures that I’m thinking about implementing. Particularly, I’m wondering about some of the specific aspects of these structures and whether they may have impact on positive outcomes I’m trying to achieve. In this post, I will particularly discuss the administration of roles in group work and complex instruction. Please post suggestions or thoughts below in the comments.

First, I’ve been reading Smarter Together with interest, and have decided to implement their suggested roles for group work: Facilitator, Inclusion Manager, Recorder/Reporter, and the Resource Manager.

I’m keen to use this structure as these roles and the responsibilities are not completely separated. There is enough overlap to avoid confusion among students regarding what each is supposed to do, yet the responsibilities are structured so that students remain interdependent throughout the task ahead of them. I’m planning to rotate these roles to give each student a chance to fulfill different group work responsibilities and build different skills needed in group work – and so students each have access to all the roles. I won’t rotate mechanically but rather plan to use a developmental framework developed during the Assessment and Teaching of 21st Century Skills project coordinated by Patrick Griffin, Esther Care, and others at the University of Melbourne. I hope to use this developmental framework to help me decide when to place students in particular roles, and what kinds of interventions are needed to help them build collaborative problem solving skills. It’s my first time through trying this out after their MOOC this summer, and so wish me luck! 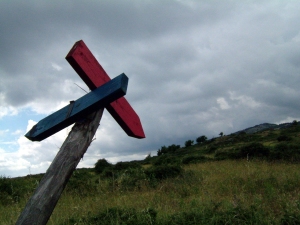 Which way for happiness? by Andrea Marutti

Last year, I struggled with deciding when to rotate groups and their members. Some of the literature I read suggested randomly choosing members for groups and reshuffling (again, randomly) groups and members after every two weeks, enforcing the fact that students couldn’t just change groups and had to learn to work with those they were paired with. However, I found that the group folders – where students put their collaborative work for reference at a later time – broke down as a system since students might have been part of two or three groups during an entire unit of study. My feeling this year is that I will only randomly choose group members after a unit of study has been completed and each of the groups has gone through that complete journey together. I wonder, though, whether this will cause conflict for students if they end up in groups with someone they don’t work well with. It remains to be seen what issues come up and I welcome any ideas about this.

A second wondering I have is how to teach my students about these roles and structures when all of them have the added challenge of being EAL/ELL learners to varying degrees? Specifically, I am thinking about the plethora of information that I will need them to take in and act on: roles and their responsibilities, norms for behavior when working in groups, language they should use to perform each role effectively, language they should use in general when working through a math problem (making observations, analysis, etc.), and the language of the developmental framework so they can understand how to develop their collaborative skills. When I consider as well the other classroom administrative vocabulary that come along with teaching in the MYP and communicating changes for Next Chapter, the challenge becomes so much more daunting. Of course, I don’t expect them to “get it” right away, but I don’t want to throw so much at them that they just turn away from it completely. I plan to put posters up, and refer to them often as I roll through activities at the start of the year particularly directed at helping to make these roles and group work behaviours explicit.

For all learners, skills to promote successful collaboration are essential to learn for many aspects of living in the world. For EAL/ELL learners, collaborative activities can create the need for them to practice vocabulary and promote language acquisition at the same time. However, I am keenly aware that piling too many challenges on students creates the danger of doing many things a satisfactory level instead of doing a few things well. Still, one can’t develop a system that works in their classroom without some thoughtful experimentation! 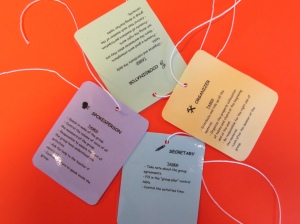 I am taking a course, Constructivism Strategies for E-Learning, through the Department of Educational Technology here at UBC, and we’ve been exploring different instructional strategies. It’s funny, but I thought I knew what “cooperative learning” was, but there are so many different definitions of it! I found the exercise in comparing strategies valuable, and decided to share my thoughts.

Cooperative learning and SGAM (small group activity method) are similar in that students discover content and teach it to one another and to the class, with the teacher is “guide on the side.”  The focus of the description of each focuses on the specific set up of the classroom activity, such as number of students in each group, how long each portion of an activity is, etc.

Cooperative learning differs from, and seems more effective than SGAM in that groups in cooperative learning are sustained over longer periods – perhaps working on a problem/project for a whole unit or a whole year, while in SGAM the description seemed only concerned with a 30 minute to 1 hour period. In addition, in SGAM, students are working with others, but the sources we were led to did not seem to be mention a focus on teaching students the skills necessary to work effectively in teams, such as listening effectively, interjecting politely and ensuring everyone has a voice.

Both cooperative learning and SGAM are problematic in that they seem to undermine some key aspects of constructivism. For instance, in cooperative learning, diversity of students is addressed but there is no provision for students to have individual thinking time – or at least this is not documented. I don’t think that a student should simply work alone and they need to learn how to work with others, but what if a student learns best by processing content alone first, then sharing their ideas? How do these students access learning?

Cooperative learning and SGAM each have students working in groups which addresses the social nature of learning and all the aspects of the works of Piaget and Vygotsky that speak to this. However, cooperative learning and SGAM are too prescriptive, which seems to contradict the “guide on the side” persona that the teacher is invited to take. Depending on the amount of control exercised by the teacher, the ownership over learning and the complex process of knowledge construction could be compromised. Hopefully, teachers wouldn’t be too invasive with their interventions and hopefully they wouldn’t just set up the class in groups and give an activity and assume the learning happens as long as the students talk it out. The question that teachers need to ask themselves constantly is where the balance lies between being too controlling and too “hands-off”?