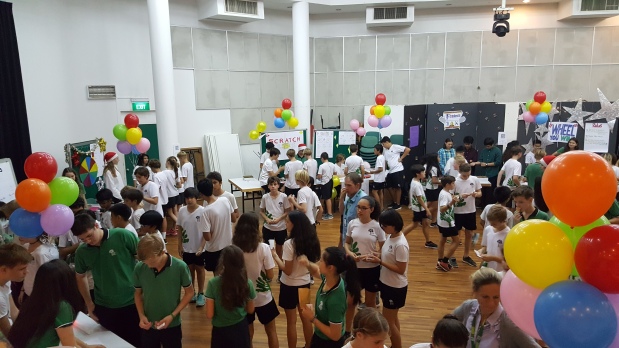 On December 8th, the tenth grade students at German European School Singapore (GESS) hosted a Math Carnival for middle school students with games of their own making. I wanted to put down some ideas while they are still fresh so our work can be of use to anyone wanting to implement something like this at their school, and also to gather some feedback to improve for next year. 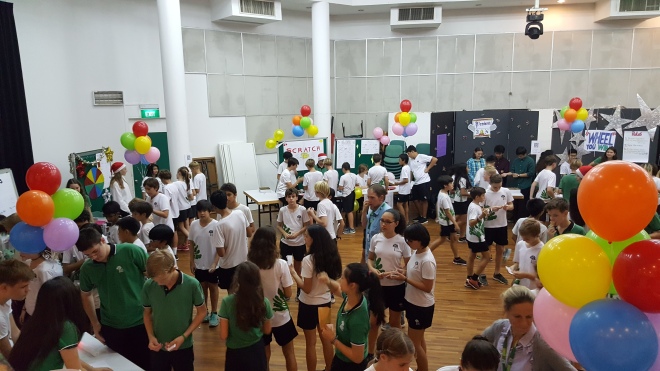 GESS Middle School students diving into the Math Carnival in its first hour.

I’ll try to give as complete a picture as possible. I borrowed heavily from an amazing colleague of mine, Melissa Griffin, and you can find details of her work with Clint Hamada detailed on her blog and the task wiki she put together. Melissa and Clint did a Casino Night task with their grade 8 (IB Middle Years Programme – MYP – Year 3) students at UNIS Hanoi. At GESS, our team offered this experience to grade 10 (MYP Year 5) students to culminate their study of probability.

We started with a question: what does the study of probability have to offer students? We came up with some ideas: to model situations where we want to predict an outcome, and to determine how (un)likely an event might be. We did already have the idea of the Carnival in mind as it was previously offered at the school, due to my experience with Casino Night at UNIS Hanoi, and because we wanted to offer a practical application to our students. We concluded that ultimately they would have to grapple with the concept of fairness as they designed a successful game: one that was both popular and where the “house” made money.

In terms of task design, this task would demand that students communicate their ideas (MYP Criterion C) and apply probability to a real-life context (MYP Criterion D). In terms of the form of their submission, we settled on a written report, though I would be keen to find out what other ideas people have for how students could meaningfully express their ideas in a summative task.

A big part of this task was collaboration. Students worked in teams of 3. Pairs ended up with too much work to do, especially on game day. Groups of 4 also worked, but you risk there being not enough work for each group member to do. In terms of how we supported these teams, we used complex instruction principles (detailed in my previous posts on roles and components) so students had interconnected roles and saw the need for one another in their development of the game.

With Melissa’s guidance and previous work, the pathway of formative assessment was clear. The task was based on design thinking principles, and we drew from these and the criteria students were familiar with in their MYP Design courses. Students were guided through gamified phases that prompted them to investigate, design, plan, create and evaluate. Each phase was scaffolded into levels, and formative checkpoints were offered for the work they produced as they went.

We asked students to investigate games of chance and games of skill, and ensure everyone in their team understood how to draw a sample space of a simple game, and calculate simple and compound probabilities for some events in a game, and give the fair odds, and adjusted odds for those events. We asked students to then provide their game designs, then follow through on one game design. They were expected to provide us with different aspects of that design, and a plan for how team members would create it before the final product could take shape. The dialogue that arose from this was rich as students  grappled with concepts and they truly began to own this project.

To support student learning, we worked to provide prompts and problems that helped students to see how probability worked in a variety of game situations. We used simulations, like this one from Gizmos (Explore Learning), and random number generator simulations on their TI-Nspire CX graphing calculators and in Google Sheets (or MS Excel). Our goal with these was to show them the relationship (and the tension) between experimental and theoretical probability, and also to give them some tools to simulate their own game ideas when they came to the investigate and design stages. We certainly welcome suggestions for resources – I’m keen to make this even more hands-on next time around.

As students gained facility with concepts and began to formulate their designs, we provided the students with A1-sized poster board to make their rules, signs, and a betting board. Students borrowed dice and spinners, and a few keen groups headed down to our Design Lab to construct bespoke spinning wheels and other game materials. The GESS Design team of Stephen Edkins and Paul Dawes were champions in guiding these additional students while they had their own classes to run!

Behind the scenes, we had plenty of “GESS Bucks” printed in denominations of $1, $5, $10, $50, and $100, and we had “badges” (stickers) made to help celebrate when tenth grade students successfully passed phases. We provided each middle school student guest with approximately $400 in GESS Bucks to play with during the afternoon, and we gave each tenth grade team approximately $1200 GESS Bucks as their starting float, which we then subtracted from their final money count at the end of the event. Our department head, Christopher Stoltz, arranged for ice cream, cotton candy, and popcorn to be offered by outside vendors who decorated our hall with a rainbow balloon arch and other sundries for a truly festive feel. On the day of the event, we had a Google Form survey available for middle school students to cast their vote on their favourite game. The tenth graders definitely made sure they earned every vote! 🙂

Overall, I’m happy that the event was enjoyable for the middle schoolers who attended as well as for the tenth graders who hosted. The degree of ownership they took was palpable and the quality of work they produced (in terms of their games and their application and evaluation reports) was high. I’m keen for a few things in the future:

If you have any of these to offer, I would be more than happy to hear!

If you’re interested, here is our final version of the task outline with rubrics.